It’s time for a good old food blog about one of my favourites.

I could never be a vegetarian, it just goes against everything I value..lol…kidding.  Veggies are good, eating them full time?  Not my dream choice.  I just love meat too much.  It’s all about the protein. 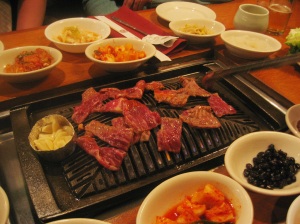 I’m going out for some Korean BBQ with a friend on Friday night, my absolute favourite thing to do – so its been on my mind cause I’ve been craving a good Korean bbq for awhile.  The first time I tried it was about 15 years ago when the first one came to Toronto.  The best Korean BBQ I’ve ever had was in Vancouver, where they are actually owed by Korean’s rather than Chinese people, which is the case here in Toronto.  This particular Korean bbq place used coals from Korean to heat up the grill, so the flavour was different and cooking time was faster because it was so hot, much better than an electric/gas grill. 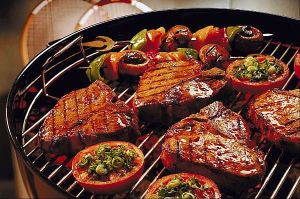 Anyways, before I slobber any more, I’m also going to a “regular” barbeque on Sunday.  Burgers, chicken, hot dogs, etc.  Since its my birthday month, all my friends have been asking me what I want to do.  My response?  BBQ.  I’ve been celebrating my birthday like this for a few years, with a simple barbeque.  I don’t need to party it up at a bar, something simple with friends is usually what I prefer.

I’ll be in bbq heaven this weekend.  And considering the weather is going to change soon – I better get in as much as I can before it gets cold.  I love grilled meat, but not so much that I’d freeze my ass off in the winter for it.  😉